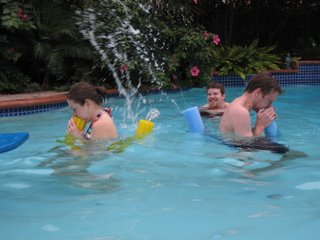 We had a great weekend! We got to hang out with most of our best friends. Heath and Barbara brought Carter, who is only 10 weeks old, for his first visit to Houston. We had so much fun. What great weekend doesn't include shopping and hanging out at a pool? Heath took care of Carter while Ross worked and Barbara and I had some girl time (shopping) on Friday. Then Saturday we took Carter to his first pool party at Emma and Chris' house where we got to hang out with more of our good friends. There were lots of babies there, and you can tell that they were the center of attention...just checkout the pictures in the album! 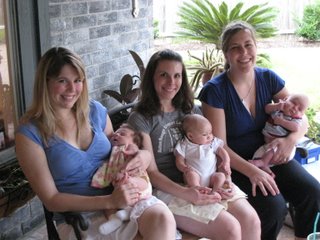 A lot has been going on over the last few weeks, but it's all been about work. We just completed STS-117/13A mission. This was my first shuttle/ISS assembly flight. I never worked one as RAVEN (our group's back room position). I'm one of the few people who had the opportunity to go straight to ODIN (the front room position). I was scheduled to work a flight as RAVEN last summer, but I went to ISU instead. This mission was one for the record books as far as I'm concerned. I think it was the most challenging mission since we began assembling the ISS. The challenges weren't all part of the planned mission or related to the blanket that everyone heard so much about on the news. The unexpected challenges were failures in several systems, and the majority of the challenges were with the computers...my system. Early in the mission the shuttle had a computer failure that I think was resolved fairly easily. I don't really know though because I was too busy dealing with our own issues. A new truss segment (S4) was brought to the ISS, and it contained 4 new MDMs (computers). The first 3 were activated without any problems, but when we attempted to activate the 4th, we never saw anything from it. This MDM was a critical piece of equipment for the mission. Without it we would not achieve our objective of deploying the new solar array. PHALCON couldn't tell us if the MDM was powered because it was impossible to pull that one piece of data out of their telemetry and plots, so we began our troubleshooting. We worked together to develop several plans to obtain additional insight into the problem. Then with that information we were able to develop a plan that ultimately resolved the problem and allowed us to activate the MDM and continue the mission as planned. It was an incredible feeling of accomplishment (and adrenaline) to work out a problem in real time.

Then a couple of days later all of the computers in the Russian Service Module failed...you may have heard about this one in the news, so I'll spare you the details. Let's just say this was a big deal and involved a lot of smart people to figure out a workaround that would allow the crew to stay on the ISS! It took longer than anyone would have like, but the Russians figured out a way to workaround the problem. We are still getting comfortable with the workaround, but we are continuing with our normal operations.

With all of this and the blanket problems on the shuttle that were also all over the news, we were happy to see the shuttle undock and safely land. The "fly-around" that the shuttle does after undocking from ISS was one of the coolest things I've ever seen. I'll try to get a picture to post.

Our next big event happens next week...yes, during the July 4th holiday. It is our biggest software transition, and software transitions are my group's responsibility. I'd like to say that once that is over I'll get a break, but there's another big event on ISS the following week. Then we hope to launch another shuttle in early August!
Posted by Elizabeth Taylor at 4:29 PM 0 comments

It's been raining a lot this weekend which isn't so bad in itself but I really need to mow the yard. It's particularly annoying because it comes in spurts. Just when it seems like it might be dry enough to mow, another downpour comes. One of those moments just happened. It wasn't dry enough yet but it wasn't raining and the sun was shining so I thought I could take Bailey for a walk and then when we returned I would be able to mow. About half way through our walk it started to sprinkle and I could hear and see the downpour about half a block away, so Bailey and I turned and ran. It was kind of fun running from the rain that I could hear chasing me down from behind especially since I just got through watching an episode of Man vs. Wild and it felt like I was in an adventurous struggle for my life! Of course, then I had to turn a corner to head home and the rain caught me. Oh well, it was fun while it lasted.

Email ThisBlogThis!Share to TwitterShare to FacebookShare to Pinterest
Labels: Bailey

The Shuttle successfully launched Friday evening which is both good and bad. Of course, we would never wish for a launch delay but it does mean that E and I both have to work tough hours. You might notice the time of this post (~3AM). I am currently working midnight to 9AM and E is working 4AM to 1PM. It's not too bad though; at least we aren't working opposite shifts.