October has been a rough month for the Taylor family. Two amazing men passed away. Ross' dad, John Taylor, and grandfather, James Stone, are now with the Lord. We miss them tremendously, and we are so grateful for the time we had with them!

Ross and I were able to be there when John passed away, which allowed us to say our goodbyes and have some closure. The reality of it day-to-day is still extremely hard though.

Ross wrote these touching words a few days later, which do an incredible job of describing John.

My father passed away on Friday. I knew him as a strong and loving husband, father, and grandfather. He expected the best from us and was always there to help us achieve it. I would not be the man I am today without his guidance and support and I regret that my children and my nephew will not grow up with him in their lives.

What I have learned over the last few days is that we were not the only ones that benefited from his character. The outpouring of support from his friends, coworkers, doctors, people that met him only a hand full of times, and even people who never knew him has been overwhelming. I believe many of his employees felt a similar bond to him that his children did. I'm sure he also demanded their best and helped them achieve it. They had a relationship of mutual respect and his employees grew to love him for it.

One of his doctors actually got watery eyed when talking with my mother and I about Dad. They developed a relationship that the doctor referred to as "stimulating." Dad always wanted to learn and he would ask his doctors for details as he went through treatment. But he also asked them about their families and I know that he had the personal cell phone numbers of more than one of his doctors because they all came to care for him as a friend.

Lastly, the support from complete strangers, not just to me but even to him, has been incredible primarily due to his time as a Marine and his service in Vietnam. The respect shown for a man who served is awe inspiring. People from around the country have commented online in support of Dad and our family because they don't need to know the man to appreciate the things he did.

Dad, we love you and we will miss you. Rest in peace.

John has been part of my life for the last 13 years, and like everyone that knew him, I loved him and had a tremendous amount of respect for him. He and Susan welcomed me into the Taylor family as if I were one of their own. I have always enjoyed watching and being a part of the dynamics of their family. They find joy in everything and are always genuinely interested in whatever topic is being discussed. They love with all their hearts, which was evident to me from early on in the days Ross and I were dating. Here are a couple of pictures with John from my first trip to Leakey, TX and from our graduation from LA Tech. 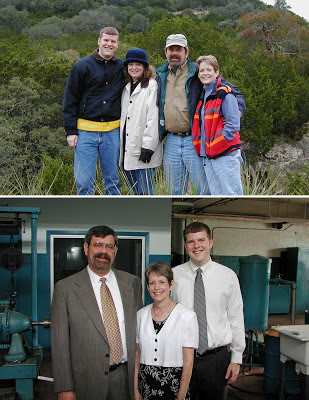 There are a handful of things I feel John loved doing. Sharing and teaching his knowledge, wisdom, and life skills; cooking; taking pictures; riding his motorcycle or later driving his convertible; sailing and fishing; and mostly, spending time with his family and best friends. 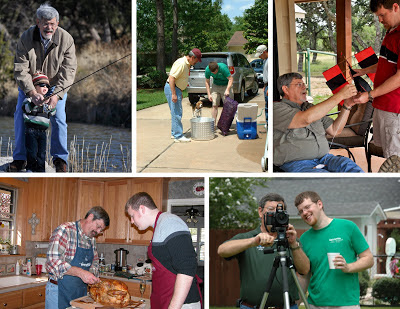 I was inspired in so many ways by John, and I know I wouldn't be who I am today if not for his influence. John is the one responsible for putting a nice camera in my hands and entrusting me and Ross to take pictures of his daughter's wedding. It was in that moment I fell in love with photography. He taught me a lot about taking pictures, but more than anything he inspired me to learn more about photography.

The joy he found in giving gifts to those he loved was also inspiring. I'll never forget how much fun he had picking out a monkey that is a little bigger than Jackson is today to give to Susan for Christmas. There was a lot of laughter and smiling when she found it, and it still brings joy to our faces when we see it...partially because it's decorated for every season! John loved to pick out jewelry for his girls or the perfect "toy" for Ross or the kids. He was filled with delight to see others filled with joy. 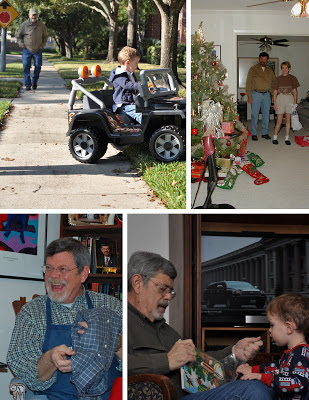 The way he loved his family and friends was the most inspiring thing of all to me. I started hearing fun stories about John's friends and their adventures early on, and the adventures continued after I met him. During the holidays, at crawfish boils, on vacations, and really any chance they had, John and Susan were surrounded by family and friends. 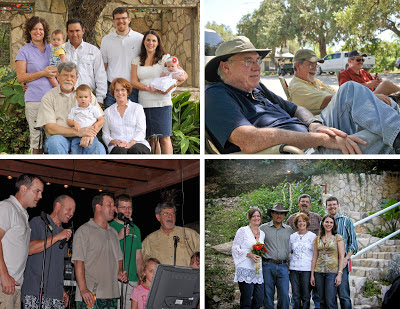 I know John loved Ross and Leslie unconditionally, and he was so proud of each of them and who they have become. He also loved his grandkids. He was known to them as Granddad, and they would truly light up his face! I don't know that I'll ever forget the first time we went to see John in the hospital a little over a year ago when we weren't sure if he was going to make it. John was in critical care, which meant Jackson and Audrey couldn't come see him. Instead they recorded a video. John was in a coma at the time, but we know he heard their sweet voices saying, "Hi, Granddad! We hope you feel better, Granddad! We love you, Granddad!" He responded physically, and I truly believe the sound of their voices was a reminder to him that he wasn't done yet! While we wish they had more time to get to know him better, we are forever grateful for the time we've had and the memories we will keep. Memories like John introducing Jackson to his baby sister, Audrey; teaching Jackson to fish; keeping Audrey warm at a freezing cold Mardi Gras parade; taking us on Polaris rides; and being there to collect rocks and hold hands when needed. 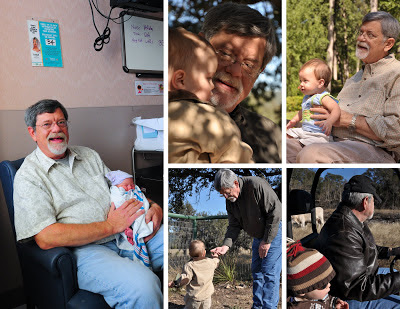 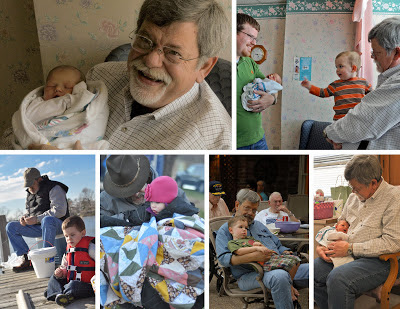 The most inspiring thing to me about both John and Susan is the way they have loved each other. They were truly best friends, and their love for each other shone through in every action and every glance. They were a team that worked off of each other's strengths, encouraged one another, laughed together, fought together through the tough times, and genuinely loved one another! You could see their love grow deeper and deeper as time went on. 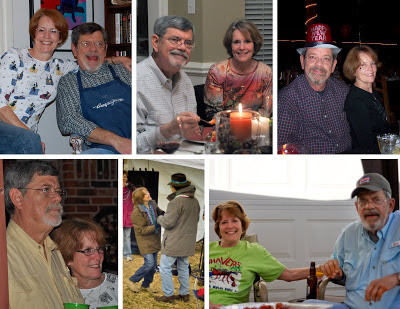 Aside from being a husband, father, and grandfather, John was also a Marine that fought in Vietnam. We've heard a few of the stories from that time in his life, but not many. He was extremely proud to be an American and a Marine though, and the outpouring of gratitude and sympathy from fellow servicemen and people who never knew him was incredible. John's mission here is complete. Though we feel the time was too short, we trust in God's plans. 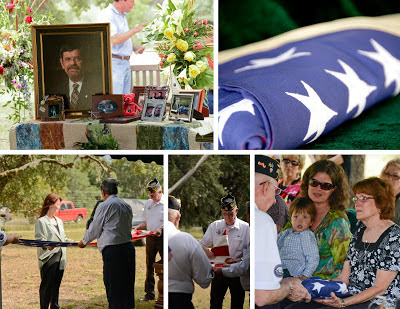 I've included the write up from the obituary below for those of you who are interested in knowing a little more about John. He truly was an incredible man!

SHREVEPORT, LA - Mr. Taylor, 64, passed away on Friday, October 5, 2012 at 6:20 pm after a long and hard fought battle with cancer and the effects of treatment. John was born on September 21, 1948 in Shreveport, Louisiana. He was a graduate of C. E. Byrd high school and Northwestern University. John proudly served in the United States Marine Corps, India Company, 3rd Division from 1968 through 1974, including active battle during the Vietnam War in 1969 and 1970.

In 1977, John began his 33 year career at Evergreen Presbyterian Ministries, where he served in many leadership positions throughout the organization before becoming Vice President of Program Operations in 1989. He held this position until becoming Evergreen's fourth President and CEO in 2006, where he served until his retirement at the end of 2010. John has said that his proudest achievement at Evergreen was his contribution to Evergreen's transition from a rural institution based program to community based group services. John strongly believed in the mission to "help people with disabilities build better lives" by allowing clients to direct their own lives and develop pride by choosing jobs, recreational activities, and routines while living closer to their homes and families.

John and his wife spent many adventurous vacations sailing in the Mediterranean, Caribbean and elsewhere with his beloved cousin and friend Dick Mitchell who preceded him in death in 2009. John also enjoyed a variety of other outdoor activities, such as fishing, bicycling, riding his motorcycle, and photography.

John was preceded in death by his parents, Jack and Wilda Taylor and his sister, Lucretia Taylor Miller. He is survived by his wife of 43 years, Susan Stone Taylor; his daughter, Leslie Rodriguez and husband, Philip of Leakey, Texas; his son Ross Taylor and wife, Elizabeth of Houston, Texas; his grandchildren, Mitchell Rodriguez, Jackson Taylor, and Audrey Taylor; and his sister, Beverly Christianson.

Visitation will be held from 5:00 pm until 8:00 pm on Monday, October 8 at Osborn Funeral Home. Funeral services will begin at 10:00 am on Tuesday, October 9 at St. Paul's Episcopal Church. Officiating will be Reverend David Greer. Interment will be at the Taylor Family Cemetery in Leakey, Texas.

If you would like to be a part of John's legacy, please consider making a donation to St. Paul's Alter Guild Memorial Fund, the Client Needs Fund at Evergreen Presbyterian Ministries, or a charity of your choice .

Posted by Elizabeth Taylor at 10:32 AM