I've gotten a little behind on posting, but I'm hoping to catch up this weekend. Here are some pictures from our Easter celebrations. My dad joined us for the weekend and helped Jackson and Audrey decorate and dye eggs. We had fun flying kites and hunting lots of eggs that weekend! 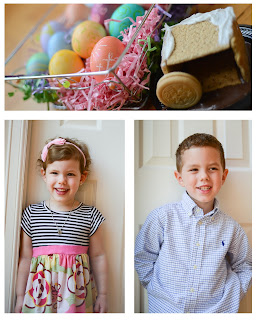 All of the younger kids did a really cute craft at church with graham crackers, an oreo, icing and chocolate to make Jesus' empty tomb. It turned out great and smelled really good too!

We spent Easter afternoon at the Newman's house with friends. Their house backs up to an old golf course, so the kids had more fun playing and hunting eggs there! 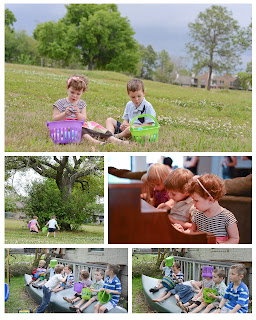 I love the two pictures above because it shows the interactions between Jackson and Audrey rather well these days...monkey see, monkey do! (Notice the baskets on the heads.)

The daycare also had egg hunts. Ross made it to Jackson's egg hunt in the morning. After they found all of their eggs, they had fun with some confetti eggs! I was able to join Audrey's class for their egg hunt in the afternoon, and all the kids were bubbling over with excitement to get outside and find some eggs! Knowing treats were inside probably helped! 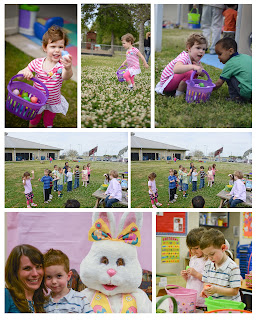 I ended up taking pics of all of the kids at the daycare with the Easter Bunny, which of course means neither of my kids wanted to go anywhere near the bunny! Jackson was willing to if I was in the picture too, but Audrey wanted nothing to do with it!

There are more pictures of our Easter celebrations in the album

Posted by Elizabeth Taylor at 2:43 PM