Monday was Jackson's 1st day of kindergarten and Audrey's 1st day of Pre-K3!!! I apologize for the really long post, but this is a big deal!!! We've all been excited, nervous, and a little overwhelmed about reaching this milestone for Jackson. The transition really started about 3 weeks ago when we pulled Jackson out of his day care and sent him to a karate camp for 2 weeks at the place he is now doing after school care.

There was a mixture of excitement and nervousness about making new friends and being in a new place when he went to camp, but the kids and the adults at Bushi Ban were amazing the first week. The second week we began to see some changes, both good and bad, and we realize the "transition" was happening in full force. With Jackson, transitions have always been a little rough, and this one has been no exception. Despite the challenges associated with change, having Jackson start this transition early has worked really well for him, and having a strong support system of encouraging friends has worked well for me!

The first day of kindergarten, we decided we would take Jackson to school, but knowing he wanted to ride the bus, we thought it would be a good idea to meet some of the kids at the bus stop and see the process before he actually had to do it. This turned out to be both a great idea and a horrible idea all at the same time. Jackson was so excited about it he had a meltdown when we wouldn't let him get on the bus! In hind sight we probably should have just let him get on and met him at the school...not what we chose to do though. Fortunately, Ross was able to help him recover, and we managed to get some happy first day of school pictures! 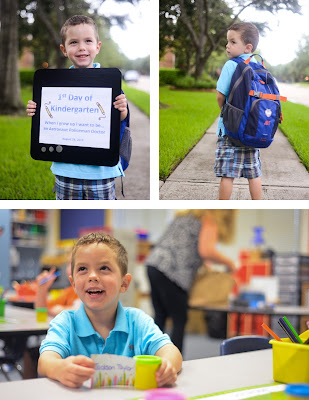 We got to the school before the doors were unlocked, and Jackson got to see several of his friends before walking in. When the doors were opened, he held Audrey's hand, walked her down the halls, and showed her where he would be. It was adorable! We left him sitting happily at his new table playing with playdough. 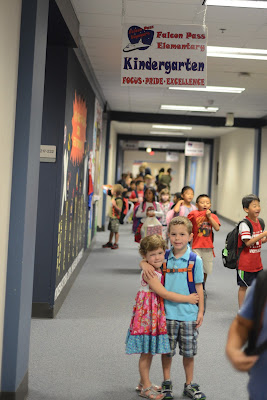 In anticipation of Jackson's "transition behavior" I'd written his teacher a note, which turned out to be a good idea because I got a phone call that afternoon letting me know there had been a couple of challenging moments during the day, but overall he had a great first day! Each day this week got a little better, and by the end of the week, he had a smiley face with no note in his take home folder! He was greatly rewarded on Friday!!!

Jackson has LOVED riding the bus in the mornings. There are around 10 kids at the bus stop every morning along with parents and 2 or 3 dogs. The bus driver seems amazing, and we've all enjoyed getting to know our neighbors a little better.

When we picked Jackson up from Bushi Ban each day this week, he was grinning from ear to ear and having a blast. We even got to watch a couple of the karate classes and see how quickly he is learning there too.

Early bedtimes (7 or 7:30) were part of our routine this week to try to help with all of the changes. Even though Jackson doesn't always nap anymore, he's still used to a rest time. Despite the early bed time giving him almost 12 hours of sleep, Jackson still had to be woken up to catch the bus some mornings!

I was able to join Jackson for lunch on Friday, which was fun. He was SO excited to see me, and I loved getting to see him in his new environment. He got to invite a friend to eat with us at the parents' table, so I got to get to know his "best friend at this school," which made it clear he still has other best friends too.

Audrey has done amazingly well with her transition to a new class at her school. She has been a little sad not to have her big brother in the car with her on the way to school or just down the hall to go visit, but she has dealt with it all really well! We've also enjoyed a little alone time with her each day. It's given us more time to get to hear about the things that are important to Audrey!

Audrey has loved walking Jackson to the bus stop each morning, and now that we're also taking Bailey, she loves getting to be responsible for the leash. Here are her first day of school pics and one from our walk home from the bus stop the first morning...you can see Jackson is a little grumpy, but Audrey is happily leading the way. 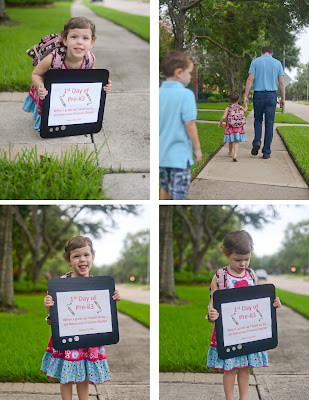 We're excited to have the first week behind us and enjoy a long weekend for Labor Day. I think it's going to be a great year!

Posted by Elizabeth Taylor at 8:25 AM