Audrey's class went on their pumpkin patch field trip on Monday! The plan was to go to Froberg's to check out their first ever pumpkin patch and corn maze, but after loading onto the bus, we found out they had to cancel due to rain. That didn't stop this group though! We went to the local pumpkin patch at a church down the street instead, which is where we've gotten our pumpkins every year. The kids didn't know any different! The church was expecting another group that ended up cancelling due to the rain, so they were all set up for us! The kids listened intently to a story about pumpkins. Then they scoured the patch for the biggest, littlest, and silliest pumpkins they could find. 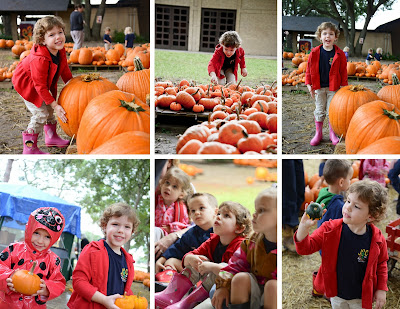 The kids got to go to McDonalds for lunch and play on their playscape before heading back to school. Ross was able to join us for lunch since we were close by, so that made it an extra special day for Audrey!

There are a lot more pictures in the album!

Posted by Elizabeth Taylor at 1:36 PM

Audrey has a way of sharing her excitement in her smiles!