Before leaving Houston, we did our best to spend a little extra time celebrating all of our friendships. Jackson brought donuts to Bushi Ban (where he takes karate) on his last day. He had a lot of fun hanging out with everyone that day, and Bushi Ban did an incredible job of making it a special day for all of us!

When we arrived, Jackson was greeted with a huge card made by one of his best friends, Sophia. She had everyone at Bushi Ban write a note to him in it, which he absolutely loves! It's hanging in his room in CA, and he looks at it often!

We also got special pillows for Jackson and Audrey to have all of their friends sign. The pillows went with us just about everywhere we went the last week in Houston, and Bushi Ban was no exception!

During the day Jackson and his friends from Bushi Ban went to Mr. Gatti's to eat, play, and celebrate. One of his instructors and friends joined them despite being off work at the time!

When I picked Jackson up in the afternoon, they had everything ready for a special photo shoot, which you know I loved and appreciated! A few of Jackson's instructors weren't able to be there, but they will never be forgotten! Master Kazi, Master Jamie (pictured below), Master Chaw, Ms. Cheryl, and Ms. Liz have been absolutely incredible for Jackson and our family this year! If I haven't said it before, I whole-heartedly believe Bushi Ban was the best place for Jackson to spend his time after school last year and throughout this summer! 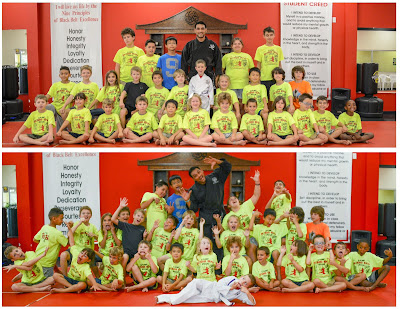 I'm pretty sure Jackson got a picture with everyone at Bushi Ban that day. They are each so special to him. Here are a few of the pics, but there are a LOT more in the album. 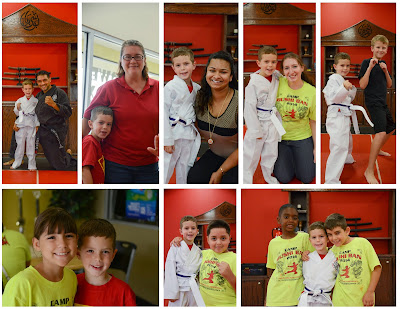 Also, did you notice the new belt color in the pics? Jackson got another double promotion to a purple striped belt! Since he wasn't going to be in town for the upcoming graduation, they gave it to him early!

Master Kazi reminded Jackson that this is not "goodbye," but "see you later" since he truly hopes our paths will cross again some day. We certainly hope so!

Posted by Elizabeth Taylor at 1:01 PM