Ross and I had our 10 year wedding anniversary on August 17th! We took a 5 day trip to California to celebrate! Nana and Pop split the time with the kiddos so we could get away, and we are so grateful! It was a perfect getaway for us!

We arrived in San Francisco early in the afternoon on Saturday. We dropped our bags off at the hotel and went exploring! We started in Union Square where we did a little window shopping. Then we wandered into Chinatown where we checked out more stores and bought the kiddos their own kid-friendly chopsticks. We'd made reservations at a small French restaurant called Cafe Claude, which was a perfect anniversary dinner spot. The food and wine were delicious, and they treated us to a glass of champagne to celebrate! From there we made our way to Magician Peter Morrison's show, which was very entertaining! He involved the members of the audience quite a bit. Ross managed to avoid getting up on stage, but I had to dance with him. The dance of course was a lot of silliness that ended with a never-ending trick! It was a fun start to our trip!

The next morning we found a great place for breakfast called Stacks, which seemed to be a popular place for the locals. We got there just in time to snag a table. By the time we left there was a long line of folks waiting. It was good that we got there when we did because we had big plans for the day! We had signed up for a 10 mile Streets of San Francisco Bike Tour. Our tour guide, Beebe, was awesome! We got to see Golden Gate Park, Haight-Ashbury, funky street art in the Mission, Victorian architecture, and a historic “wiggle” route used by the city’s founding missionaries.

The street art was pretty impressive! Almost every piece had a very clear message. Beebe explained how the artists are responsible for maintaining their pieces. They will often get "tagged" by other folks, and it's up to the artist to fix it or even choose to leave it if they think it adds to the message. These were a few of the ones I found to be the most interesting. 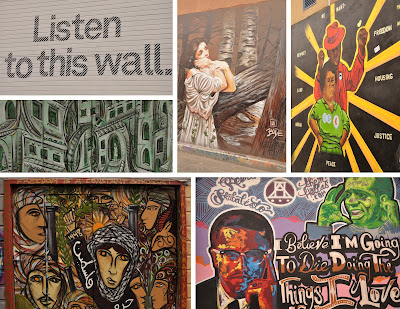 Here are a few more pictures from the tour. I had the best bike...it was pink! It was a lot of fun to ride through the different areas of the city. We were amazed at the temperature differences in different neighborhoods. The fog, obviously, made a huge difference in the temperature, and it was much thicker in some neighborhoods than others. We learned a lot about the city's history and how it has become so well known for different eras. One of our last stops was at the Victorian homes in the picture, which are called the 7 Painted Ladies. One of them was the house from the show Full House. The park we stopped in to see these homes also gave us a great view of the city! 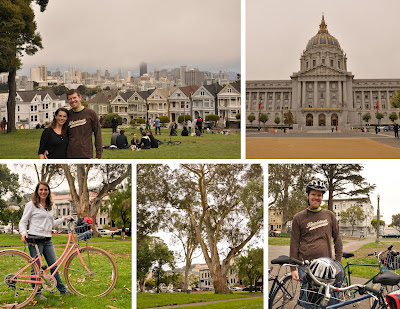 After grabbing a late lunch, we hoped in the car and headed to Healdsburg. To get there, we drove across the Golden Gate Bridge. I managed to get a few photos from the car. The close up foggy pictures are actually from the drive back, but I think it's pretty interesting that the far away pictures with the fog covering the top of the bridge and the picture with the clear sky were within a few minutes of each other... 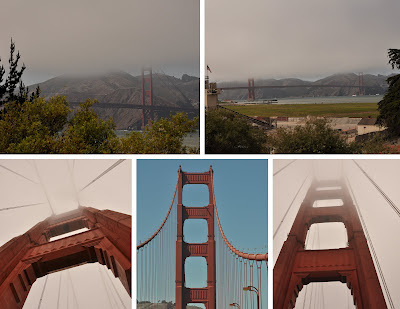 We got to Healdsburg just in time to check out the square and visit our first tasting room, Topel. The wines were great, as well as the staff. We talked about our plans for the trip, and they gave us some great advice! The lighting was gorgeous when we left Topel, so we had our own mini photo session in the square where I got to share some of the tips I learned in my mentoring session. We ended up with a few really nice pictures of each of us. 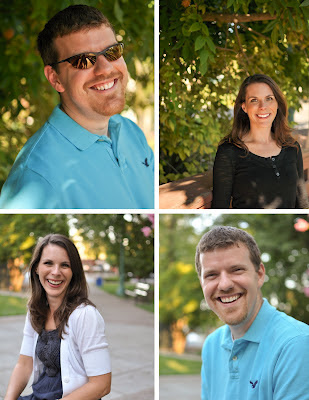 The next morning we walked to Wine Country Bikes for a 25 mile bike tour of the Dry Creek Valley. We were both a little nervous about doing this long of a ride especially after a decent ride the day before. It was great though! Our first stop was at Dry Creek Vineyard, which was beautiful. They were celebrating their 40th anniversary, which meant we got a good deal on some great wines! We also enjoyed a delicious snack on the property before hitting the road again. 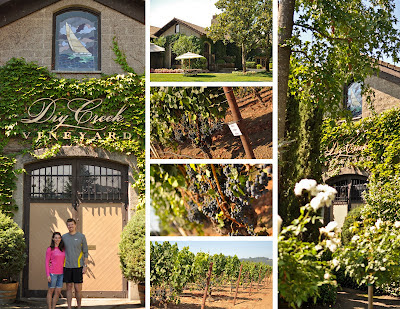 Our next stop was the Zichichi Family Vineyard, which is a much smaller operation. They don't do a wine club and sell most of their wines before they're made, which we learned is called selling "futures". The most memorable part of this stop was getting to do a barrel tasting of the future old vine zinfandel, which we decided to buy a bottle of! 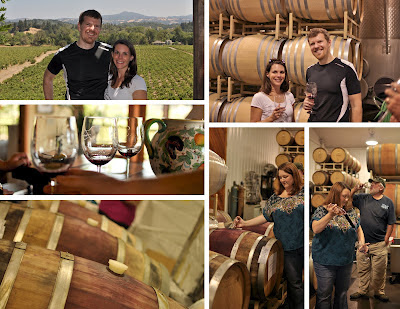 Our last stop on the tour was at the Quivira Vineyard. This vineyard also does some biodynamic farming and raises some animals, so they have a beautiful garden at the front of the estate with vegetables and flowers, as well as a pig, a chicken coop, and honey bees. We got to wander through the estate and take a few pictures of the giant sunflowers before enjoying lunch at one of their picnic tables. Our tour guide was amazing through all of this! He was the perfect host for the day, and we felt like we'd made a new friend by the end of the day. 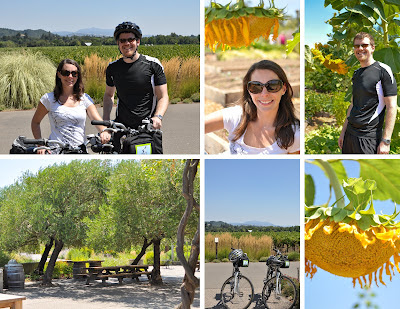 We spent the rest of the afternoon and evening checking out more of Healdsburg, trying a few more wines, and enjoying another delicious meal. We actually joined our first wine club too! We really enjoyed several of the wines at Thumbprint Cellars, and decided joining the wine club would be smarter than trying to find a way to carry MORE wine back to Houston with us.

The next morning we hopped back in the car and made our way to Sonoma Canopy Tours in Occidental where we did a little zip-lining through the redwood trees! We had to pass "ground school" to be able to go up in the trees, and unfortunately, one of the sweet ladies that was signed up for the tour wasn't able to join us in the trees. She was 87 and was there to celebrate her 91 year old friend's birthday! The 91 year old got to join us. They were both such an inspiration! Apparently, they try something new every year. 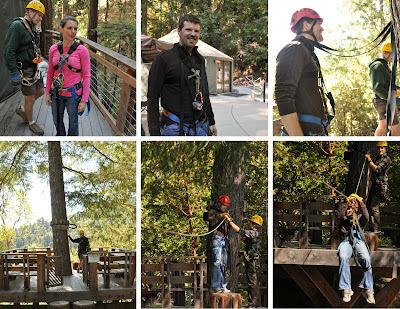 They called the first of seven zips the "bunny zip" like a "bunny slope", which was a perfect way to get rid of any nerves you may have! The next few zips got progressively longer. The longest was over 800 feet, and the highest point was 200 feet when we zipped across a gorge. I think the highest platform was 94 feet. We learned a lot about the trees and how they grow to survive there, as well as that they sway in the wind! The views were gorgeous, and it was incredibly fun! 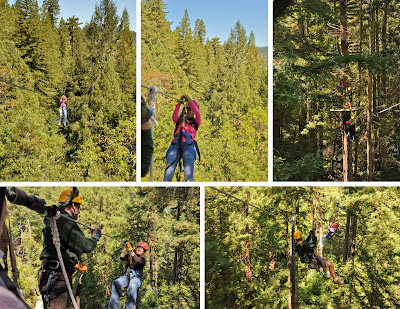 We also walked up a spiral staircase around one of the redwoods to a couple of sky bridges. I loved the structures and was impressed with how they managed to construct them in a way the trees accepted them. 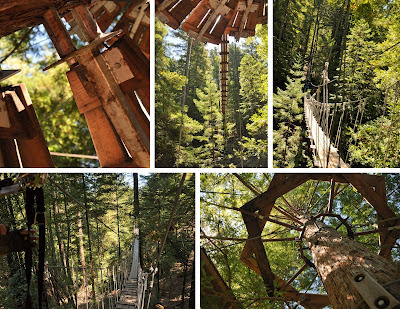 To end our adventure we rappelled from a platform to the ground. One of our tour guides was nice enough to take a picture of Ross on his way down since I went first! Did I mention I was the first one to zip and the first one to rappel? I was impressed!

We drove back to San Francisco after having lunch in Occidental. We were depending on our phones for navigation at this point. However, we weren't getting a good signal, so we just drove. We ended up seeing more beautiful scenery and eventually got our navigation going again and found our way to our hotel near Fisherman's Wharf. We walked from Pier 39 to Ghiardelli Square and back while taking in the sights, sounds, and smells of this major tourist attraction. 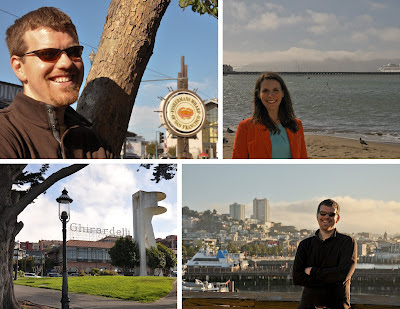 We wandered through a few galleries and shops before deciding we were ready for a break! We found a spot to rest and enjoy another glass of wine on Pier 39 and did a little people watching. Once we found some energy again, the sun was beginning to set. We caught a glimpse of the Alcatraz prison and the sea lions before stopping for a bread bowl of clam chowder for dinner. 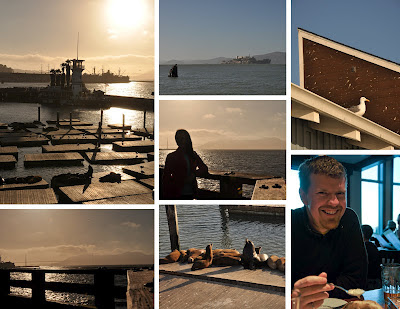 When we headed back to our hotel we stumbled into one of Rodney Lough's photography galleries. We were both in awe to say the least. It was inspirational in so many ways to me and a great way to end our trip.

We had an incredible time but were also eager to see our kiddos when we returned! I think back on our wedding day, and one of the things I remember is my mom reminding me that the wedding day wasn't intended to be the best day of our lives. She reminded me that this was just the beginning and the hope is there will be even better days to come. After 10 years, I can say there have definitely been even better days, and I look forward to many more!

If you managed to get all the way through this lengthy post and are interested, there are more pictures in the album.

Posted by Elizabeth Taylor at 8:41 PM

Beautiful shots! I just love San Fran. I left my heart there. If I had known you were going, I could have given you some suggestions, but it sounds like you found some great places!