Less than 12 hours after I returned from my leadership training in CA, the entire family and our friends, the Fullilove family, were on a plane to Denver! We spent the weekend attempting to ski at Copper Mountain. It was a first for the entire Taylor clan!

We arrived on Saturday and spent the day acclimating and grocery shopping. We spent a little time playing in the fresh snow, throwing snowballs, making snow angels, eating snow, and attempting to sled. It was fun for a while, but the kids got tired quickly and began complaining...we were worried about what that might mean for the days to come. 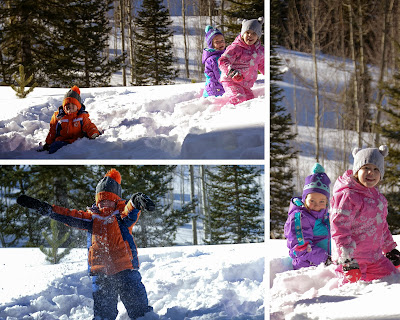 That evening Jackson experienced a little elevation sickness, which made us worry even more. Fortunately, we got him hydrated and rested, and he was ready to go the next morning!

We loaded up and got the kids checked into ski school first thing on Sunday. Then we checked ourselves into lessons!

We practiced getting in and out of skis and learning the basics. Then we moved onto a hotdog lift and a little free skiing for practice. Next, it was time for a real lift! We made our way up, and we each made it down the easy green once. Unfortunately, as I was taking the lift back to the top, I could see Ross picking himself up after a fall. I didn't think much of it until I got back to the bottom again and found him debating what to do.

He heard/felt a pop in his lower leg when he fell and was in a lot of pain. I quickly took the lift back up again to find our instructor who rushed down with me following closely behind. The instructor called one of the rescue folks. While waiting, our instructor did an initial assessment and took really good care of Ross. When the rescue guy arrived, he sledded Ross to a nearby warming hut to better assess the injury. We were in luck because he was a Physician's Assistant! After a lot of questions, some poking around, and a few cries of pain, it was determined that Ross likely strained/tore a muscle in his calf.

After wrapping his leg, they got us a ride back to the resort, and helped Ross inside. The instructor stayed with us through the whole experience! Once we were inside, he helped us get all of our ski gear put away, and then helped Ross to the bar for a beer! Needless to say, he got a nice tip for taking such good care of us.

Ross is convinced that tip is why the instructor came back a little while later and offered to take me down another longer green run since our lesson had been cut short. I'm convinced he would have done it either way!

Ross spent the rest of the trip recovering at the resort. The silver lining was that he was able to take some pictures!

The kids did great in ski school! Their instructors not only thought they did well learning how to ski, but they also complimented them on their behavior and treatment of one another!!! They said they've never had a brother and sister that took such good care of each other! At the end of day 1, Jackson was doing well with the basics of stopping and going, and Audrey was very close to being able to stop on her own. 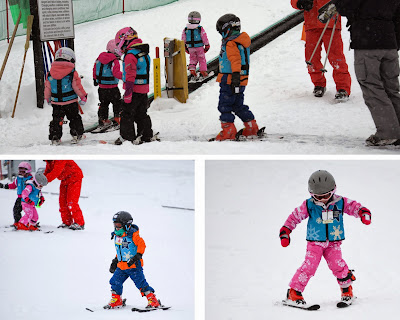 The next day, we got the kids dropped off and Ross set up at the resort. I joined Emma, Chris, and Clara for a day of skiing. It was a lot of fun! Since Clara is still relatively new to skiing too, the pace was slow enough for me to keep trying out new things and better get the feel of skiing. Clara gave me a hard time because that meant I fell a little more. I kept telling her, "you're not learning if you're not falling!" I'm not sure she bought it though.

Since Ross was not able to join us, he was also available to hang out with Clara when she needed a break. That meant Emma could take me on a little harder (still green) run. I had one particular fall on that run where I just couldn't find a way to get up! Of course, I eventually did with my new instructor, Emma's, help. The last part of that run was actually the toughest for me because it was so steep...I was doing ok until the very bottom, and Ross was there to catch it on camera! (The pics don't actually show the steep part of the hill though) 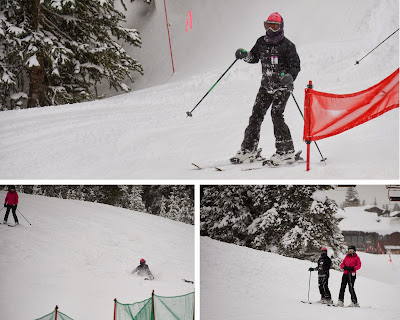 At the end of day 2, both kids were working their way through the cones and stopping well! We checked with the instructor, and he thought Jackson was ready for the green run! Audrey is, unfortunately, still too young for the lift. However, we were all so impressed with how natural she looked in her skis and going through the cones. 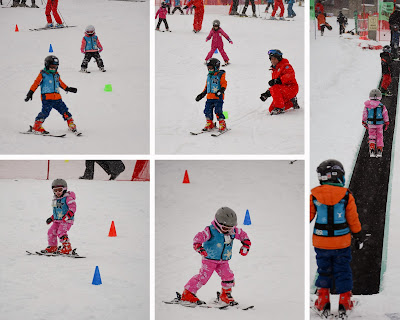 Jackson was beyond excited though! He loved riding the lift to the top. About halfway there he looked out and exclaimed, "Wow! It's so beautiful up here. It's so peaceful." It snowed the entire time we were there, which meant the tree limbs and everything around us were blanketed in snow. It really was amazing!

Jackson did great going down with Emma's help. She skiied backwards almost the entire way. When she wasn't backwards, she was "helping" Jackson go a little faster down the slow parts by essentially carrying him. He loved that so much, she took him down the last part of the run so he could go really fast! 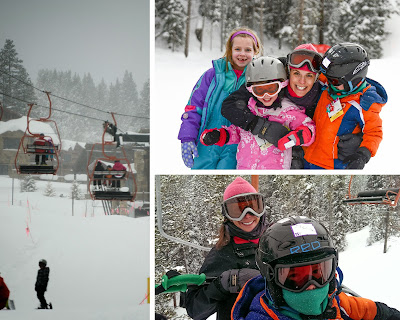 The kids and I had an incredible time learning to ski and can't wait to go back someday. We're all bummed Ross wasn't able to join us more, but he says he's willing to try again!

There are more pics of me falling...I mean all of us skiing in the album!

Posted by Elizabeth Taylor at 8:26 PM