Another Stone Family Reunion has gone down in history! We spent Memorial Day Weekend in Shreveport with our families. Ross' family now includes my mom and dad in the festivities, which allows everyone to see us a little more. The events were the same as usual, and just as fun if not more so. Saturday night we had dinner at Ross' Aunt Dottie and Uncle Jim's house where we got to spend a little time catching up while the kids played in a bouncy house and ran around in the backyard.

Sunday morning we had brunch at Ross' mom's house. There were lawn games, frisbee, and a puppet show. The puppet show is always Jackson's favorite, and this year was no exception! From the moment he saw Aunt Carol on Saturday evening Jackson began asking about the puppet show, so when the time came to set up on Sunday morning, he was more than happy to help. This year was especially fun for Jackson since he can now read! 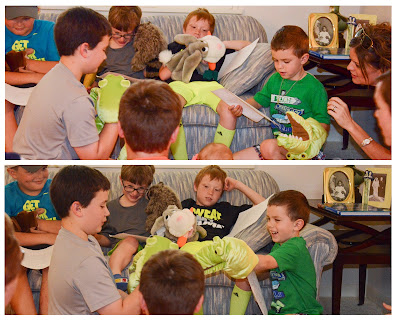 They did several stories for everyone and had lots of laughs. Eventually, all of the boys ended up sitting together playing around, and the girls were all gathered around the baby of the group...there were lots of ooooohs and awwwwws. Sunday afternoon and evening were spent at Ross' Uncle Ronnie and Aunt Laura's house. It was a perfect day for swimming and karaoke! We were super excited because Jackson officially became a swimmer that night! He can now jump off the diving board and swim to the side of the pool. We are SO excited about this milestone!

It was a wonderful weekend with a wonderful group of people! There are a few more pictures in the album!

Posted by Elizabeth Taylor at 8:16 PM