In the last two weeks Jackson has been on the go. Not only is he an expert crawler now, but he's pulling up on anything and everything. He also knows exactly what he's not supposed to get into, and goes straight for it! He's definitely keeping us on our toes. His favorite things to get into are the candles by the fire place (see pic below), the electronics by the TV, and of course, Bailey's dog bowls...they're twice the fun because they make noise when hitting the floor and have water to splash. 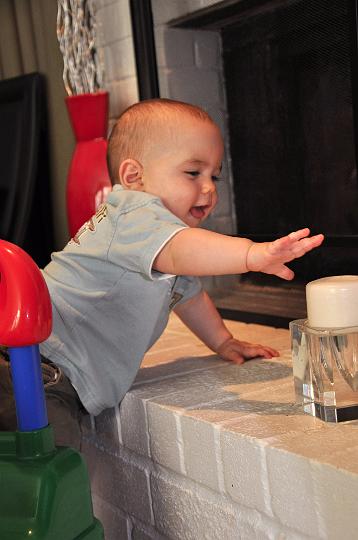 He's really starting to figure out toys too. He's great at opening and closing things, and he's started putting objects in things and pushing buttons to get a specific response. His train provides lots of entertainment with the seat that opens and closes, levers to push and pull, and being able to ride or push it. He has a blast with everything he does! 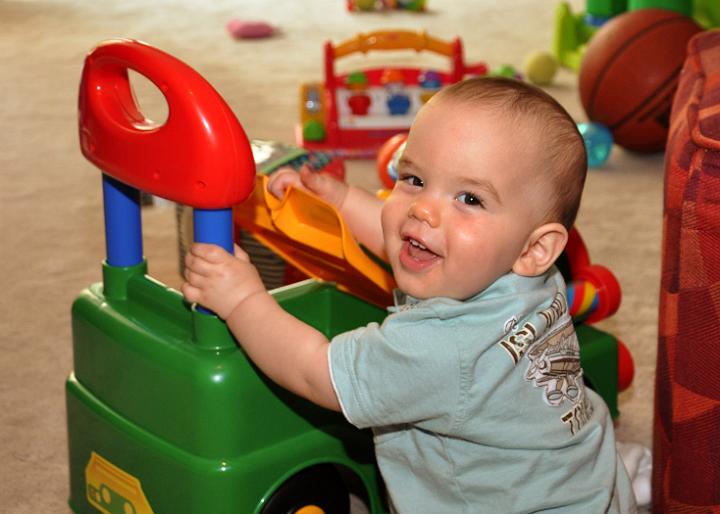 There are several more pics of Jackson playing and having fun today in the album.

This weekend had it's ups and downs. Yesterday was fun and relaxing for me and Jackson. While Ross spent the entire day rebuilding our patio cover, which looks great, Jackson and I went to the park with our friends Emma and Clara. Then Jackson and I hung out in the backyard with Ross. Jackson got a baby pool to play in, but it was a little too cold still to be in it. Instead, Jackson had fun leaning over the edge, splashing the water and putting things in the pool.

Today wasn't as relaxing...Jackson decided he didn't need a nap today, which was a first for us. He's refused naps at daycare before, but never at home...it made for a long day. I say that, but he was still very happy overall. All of the pics in this post were taken today, so you can tell he didn't struggle with it too much. It was just around the times he was supposed to be sleeping that were difficult.

Posted by Elizabeth Taylor at 7:08 PM