Our trip to Florida was filled with ups and downs...there's a lot to tell, so bear with us.

I managed to pick up a book called Airport the night before we left, and I'm so glad I did. I think it really helped prepare Jackson for what to expect, and he did great! He loved watching the airplanes in the waiting area, and both kiddos did really well on the plane. Since Jackson is still under 2 they both rode in our laps. Ross and I weren't able to sit together because the flight was full and there are only 4 oxygen masks per row (3 adults + 2 kids = not enough masks).

We flew into Tampa, rented a car, and drove to Kennedy Space Center (KSC) on Thursday. We wanted to make sure we knew where we were going on Friday and took the opportunity to check things out. We saw the air force museum with rocket engines and missiles, checked out the Mercury 7 Memorial, and launch complex 14 where the Mercury-Atlas 6 Friendship 7 spacecraft was launched making John Glenn the first American to orbit the Earth. 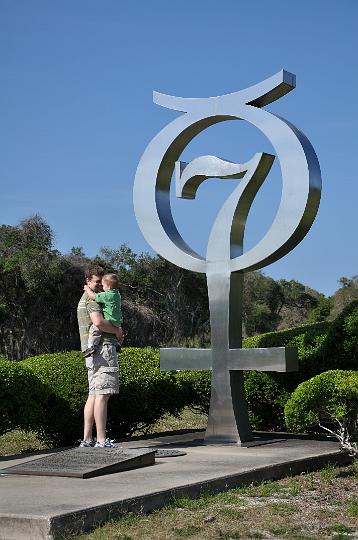 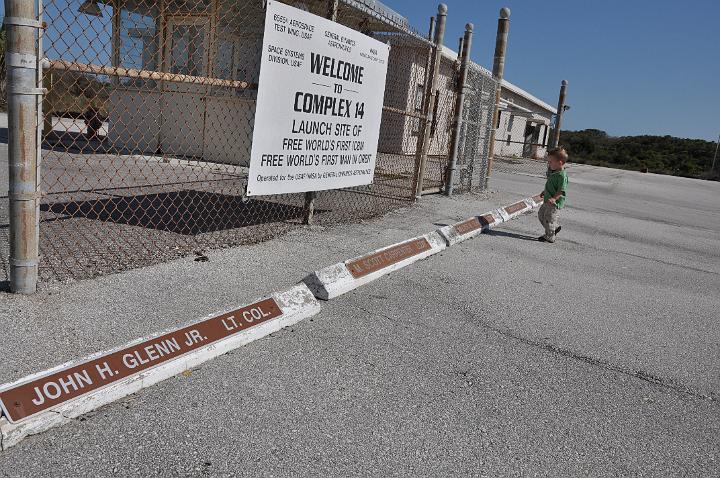 From there we made our way to Daytona where we'd rented a house just 2 blocks from the beach for the weekend. We settled in and were looking forward to the launch on Friday since everything including the weather still looked good! Launch day didn't start off great for the Taylor family though. Jackson woke up at 4 AM with a barking cough and having trouble breathing. Not knowing where a hospital was (and not being able to find one quickly on our phones) we called 911. It turns out 911 won't just give you directions to the nearest hospital, so Jackson and Ross got to go for a ride in an ambulance! Audrey and I followed in the rental car for what felt like the longest ride of my life. Jackson was checked out on the ride and given a breathing treatment along with a yellow bear by the wonderful EMS lady. He was diagnosed with croup before we even left the house, and by the time we got to the hospital he was doing much better. One nice thing about going to the hospital in an ambulance is that you don't have to wait to get into a room. Once we were there he was examined again and had x-rays taken of his chest, which helped confirm the diagnosis. They gave him some medicine and another breathing treatment before he was released.

Since JD was doing better we quickly gathered our things and headed back to KSC for the launch. We parked in the Vehicle Assembly Building (VAB) parking lot just in time to see the astronauts being driven to the pad! 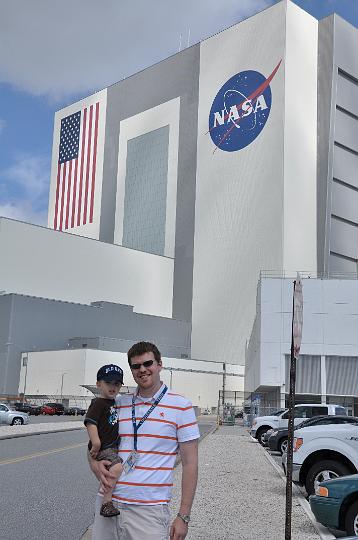 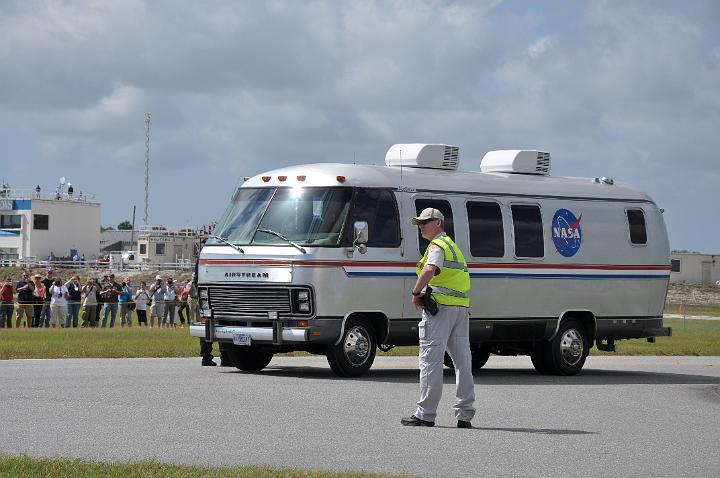 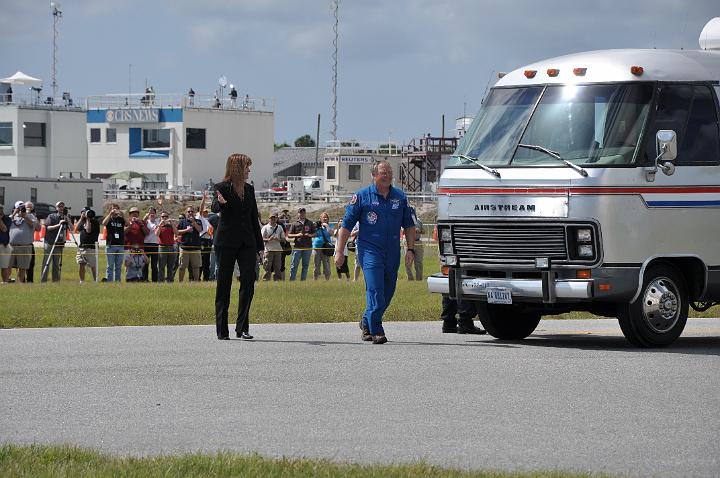 Shortly after this exciting moment, we were stopped by security and asked where we were going. It turns out the rules at KSC are different than JSC and kids aren't allowed on site without special paperwork. Oops! We felt awful because some guard is going to get in trouble for letting us on site while we wouldn't have tried if we'd realized it wasn't okay. We spent the rest of the morning talking with security as they prepared their incident report, and then we were escorted off site and photographed! Of course, in the midst of this, Audrey had a major diaper blow out. Being in the middle of a parking lot doesn't lend itself to easy clean up. We had to deal with it and another hungry kid while being questioned by security. Despite the turmoil, all of the security personnel were very nice and understanding of our situation.

It was pretty disappointing to be so close to the pad thinking we were going to see and feel the launch in such a dramatic way only to be escorted off site and left to find another place to watch the launch two hours before it was scheduled to take off (that's how long it took to do the report). There were estimated to be 41,000 people watching, so finding a place to park and watch was a little overwhelming.

We did find a great spot though. We set up our stuff at a park in Titusville where Jackson was able to run around and play until Atlantis lifted off on time at 2:20 EDT. While we weren't able to "feel" the launch, we could still hear and see it, and it was amazing. My friend, Stephen, describes it much better than I ever could in this post from a previous launch.

Here's a picture of Jackson and Ross watching the launch (Eric and Stephen, I promise I didn't watch it through a view finder...just wanted to capture the moment and prove that we were there!). 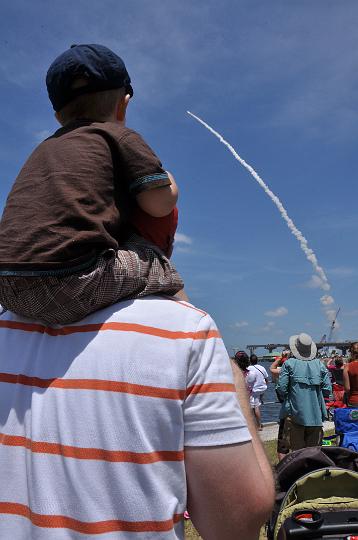 Here's one of me and Jackson with the shuttle plume still in the sky. 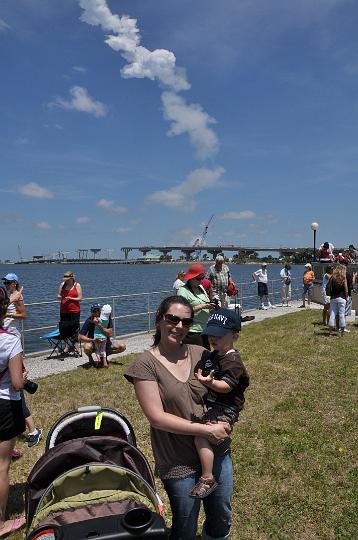 After the launch we let Jackson play a little more while traffic cleared out. 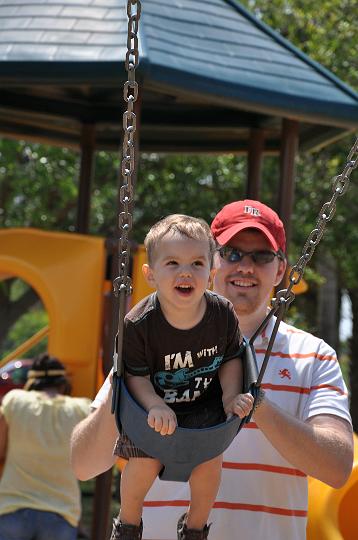 Audrey enjoyed a nice nap in the shade. 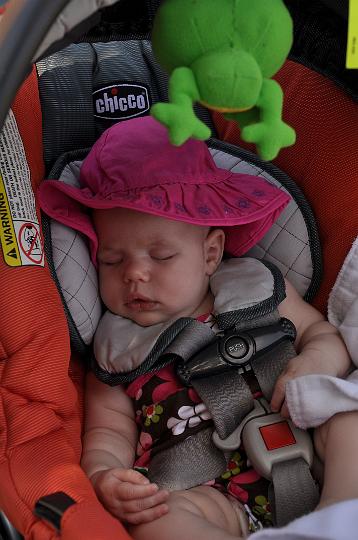 There are more pictures in the album, and more to come on our fun at the beach in another post...this one's already pretty long!

Posted by Elizabeth Taylor at 6:16 AM

I love your story - I laughed out loud to myself at the thought of you being interrogated while Audrey has an explosion. I'm sure that was not funny in the moment, but makes for a good story now. Miss you guys!!