Audrey's big girl bed arrived on Tuesday afternoon, so we set it up and began the transition that night! We transitioned Jackson when he was right at 19 months old, and he did great! Audrey is almost 20 months, and she is doing pretty well too. The first night was definitely rougher. She kept climbing out of her bed and crying, but after several rounds of consoling her and getting her to relax, she finally fell asleep. She fell out of the bed twice that night and once the following night. Last night she made it through the night without falling out of bed at all. Hooray! Most mornings have been similar to how Jackson responded. She wakes up, starts talking, and waits for one of us to come into her room before she gets out of bed. The first night she slept much later than usual, so we actually had to go into her room before we heard her say a word. I think she was already awake though. Here are some pictures of her crawling into her bed for the first time, and as always, there are more pictures in the album. 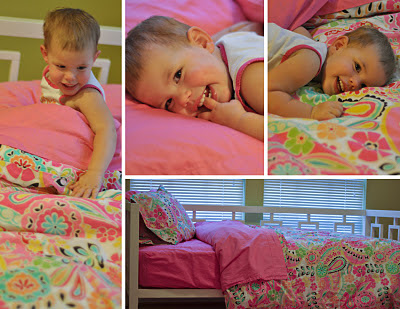 Posted by Elizabeth Taylor at 7:17 PM