Last Saturday, we spent our afternoon partying on the side of East Kings Hwy by the Duck Pond waiting for The Crewe of Centaur Mardi Gras Parade. Ross' Uncle Ronnie and Aunt Laura host an awesome gathering every year where family and friends gather together to have a good time. There is always good food and good entertainment. Despite the freezing weather (and thanks to heaters and a fire pit), we let the good times roll!

There was a little singing... 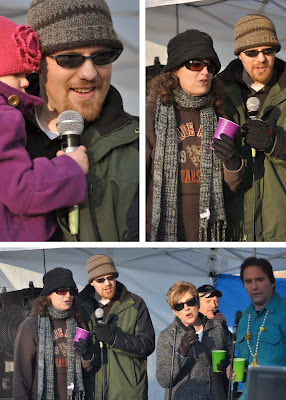 Karaoke has become a tradition for this family, and it's a lot of fun. Although, I'm only willing to embarrass myself in the privacy of Ronnie and Laura's backyard at our family reunions. I'm not willing to do it in public!

There was a little dancing... 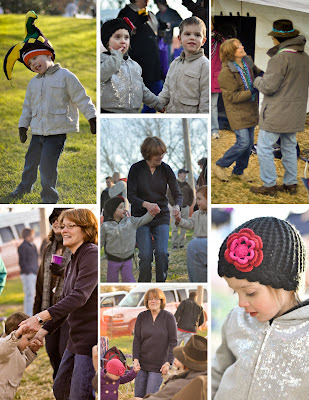 Jackson was movin' and grovin' to just about every song. We got a pretty cute video that we'll try to post at some point. That boy loves to dance! Not only did he keep folks entertained, but he also got quite a few folks to join him, including his second cousin, Anna Clair, and his Grandmother!

And, of course, there was a parade! 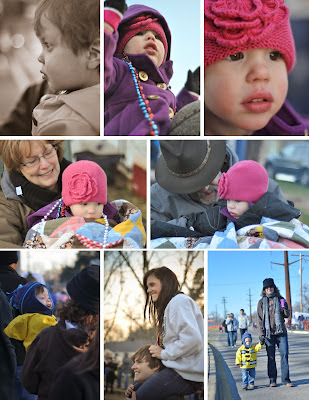 Did I mention it was freezing? The low that night was supposed to be 23! Poor Audrey was SO cold. She spent a lot of time wrapped in a blanket sitting in someone's lap (usually Grandmother or Granddad's) in front of a heater. Despite the cold, she desperately wanted to be part of the action. Her favorite spot to be during the parade was on Ross' shoulders. When a float would come by, she'd put up her hands, but kept them as close to her as possible and never moved them.

The kids got quite a collection of beads and toys this year that included a sword, several stuffed animals, frisbees, whistles, bouncy balls, and more. Jackson took a lot of the beads to school today to give to his friends for their Mardi Gras parade.

Posted by Elizabeth Taylor at 3:03 PM