A couple of weeks ago, I went with Jackson and his class on a trip to the Moody Gardens aquarium. This year's trip was a little different than last year. They had a guided tour this year and got to learn a little about a lot of the different animals in the aquarium. The tour was a bit rushed but, like last year, Jackson's favorite part was the penguin exhibit. 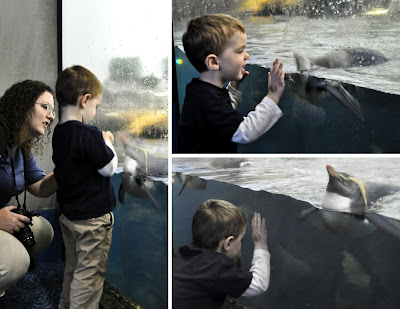 We also got to see some sharks, turtles, seals, and other sea life that fascinated Jackson. After the tour, we had lunch and then played "Let's Make a Seal." This was a fun quiz game that Moody Gardens staff did for the kids. Jackson really wanted to tell the lady leading the game something but I kept telling him not to interrupt. After the game was over, he walked over to her and said "sharks have teeth to eat us." One of the early questions mentioned sharks' teeth and I guess he felt it was important for her to know why they have them.

After the game, we watched a 3D movie about sea life off the coast of Africa. A few of the kids took a nap since it was getting well into their nap time but Jackson was focused on everything going on. It was a fun trip and I'm glad I got to go with them. There are more pictures in the album.