Jackson's class Christmas party was lots of fun too! The kiddos wore their PJs to school to board the Polar Express for a day of fun! Jackson chose his current favorite PJs, so he looked like a little elf, and apparently, he pretended to be an elf for most of the day. Audrey and I arrived at the end of the movie just in time for the gift exchange! Jackson's class had boys bring boy gifts and girls bring girl gifts. Jackson and one of his best friends, Cooper, had arranged to make sure they got each other's gifts.. 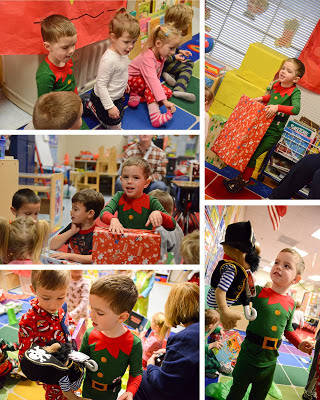 Jackson was beyond excited to find a pirate puppet in his package, and Cooper was perhaps the quietest and most focused I've ever seen him after opening his, which was a Perplexus Rookie game that Jackson loves. Audrey was sad not to get a present at this party, but she was happy to settle for another cookie!

The room mom then presented Jackson's teachers with their gift, which was such a sweet and clever idea! She sneaked into the class with the help of the day care staff who distracted the teachers while she made these adorable Christmas tree pictures with hand and thumb prints from all of the kids. On the back was a list of their names along with the year. Such a sweet way to be able remember this year!

We are so thankful for both Jackson and Audrey's teachers and how much they genuinely love our kiddos! 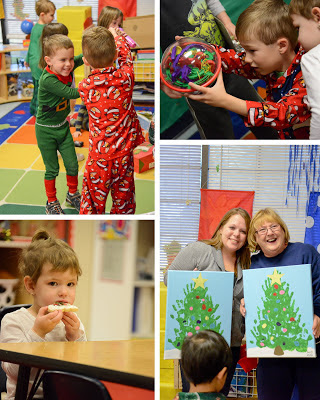 There are more pictures of the fun in the album!

Posted by Elizabeth Taylor at 6:45 PM