Thanks to a couple of great friends, we discovered the Lego Festival a couple of weeks ago. It must have felt like Christmas to the kids because they were all smiles all day long!

When we walked through the doors, we were greeted by lego statues of various characters including Lego people, Batman, Lightning McQueen, Darth Vadar, and many more! There were two very clear favorites though...we know because they got hugs! 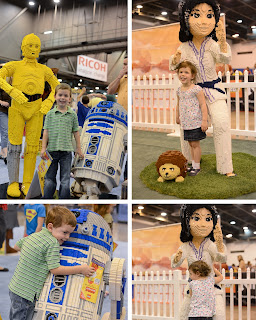 We made our way to the back of the building where we found some Lego games the kids had fun playing. Then they discovered the massive pile of Legos to play in. There were kids laying in the pile making "Lego angels". It was pretty cute...a little overwhelming to see so many kids piled on top of so many Legos, but still cute. The next stop, oddly enough, was a vacuuming spot. They cleaned to their hearts' content! 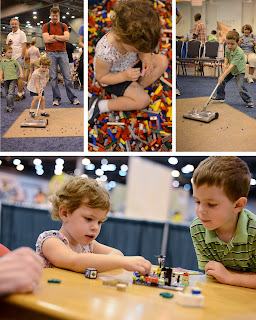 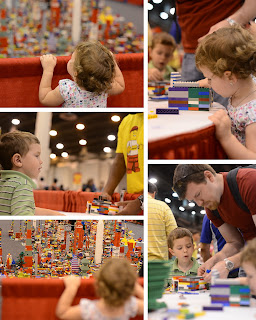 At some point we took a break for lunch, but then we were quickly back to the Legos. Jackson and Ross headed off to the Star Wars section while Audrey and I spent some time with the Friends, which of course means there are only pictures of Audrey. She made a garden, and I made the house for the garden. Somehow, she found a Teenage Mutant Ninja Turtle to put in her garden. She wanted him there because she knew Jackson would love it...sweet girl! 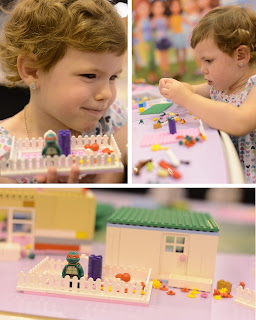 We also spent some time building and racing Lego cars and learning how to play with the Chima Speedorz among many other fun activities. The kiddos crashed on the way home, which I interpreted as a sign of success! It was a fun-filled morning, and there are more pictures in the album!

Edit (by Ross): here are some cell phone pics of Jackson's activities.

Posted by Elizabeth Taylor at 8:58 PM

I added a link to some cell phone pics of Jackson.