Jackson played soccer again this spring. He had a great time this season! In the fall, Jackson had fits on the sidelines of games and didn't want to play unless it was a practice. This time around, he just had fun! He was much more engaged in the game, and you could tell he was really learning how to handle the ball. There were still some challenges, but overall, it was a success! It's just amazing to me to see how quickly he changes!

During one of the last practices, I took pictures for the team. Not everyone was able to make it, but here are the majority of the kiddos he played with. We're excited because several of them will go to his school next year too...yes, he officially starts kindergarten in the fall! 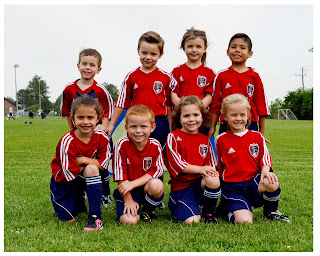 Jackson was a great helper during the individual pics of the kiddos. He started off as my model so I could get my camera settings right, and then he became the clown to get each kid to smile. Between shots he worked on his ball handling skills!