We had our annual crawfish boil this past weekend. We had just under 200 pounds of crawfish, 72 pieces of corn, 10 large loaves of bread, 5 large cartons of mushrooms, 2 big bags of potatoes, and lots of sausage. After everyone had their share, we were only left with 2 pounds of crawfish! Pretty impressive in my opinion. We had around 70 friends and family in attendance this year, which included almost 20 kiddos! We had so much fun visiting with everyone and watching all of the kids play. We had kick croquet and sidewalk chalk outside and all of Jackson and Audrey's toys inside. The sidewalk chalk was definitely a hit, and our downstairs playroom (originally intended to be a breakfast room) got put to good use.

We had fun showing Audrey off to everyone this year, and Jackson was a great host. He had fun running around and playing with everyone. By the end of the evening I think Jackson was a little overwhelmed to have so many people playing with his stuff, especially since he likes everything to have its place, but he shared very nicely. By the time he woke up the next morning everything was back in its place, which seemed to make him a happy camper. Audrey and Jackson were both well taken care of with all of their grandparents and their aunt and uncle around. I don't think we could have pulled the crawfish boil off this year with out them!

Unfortunately, our camera didn't take a single picture this year, so if anyone has some pictures, we'd love a copy!

We did get a picture of our adorable nephew while he was here visiting, so we'll share that instead. 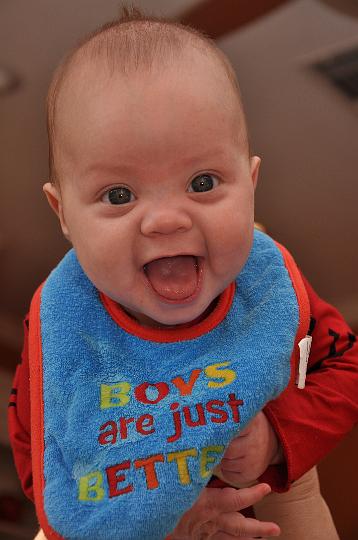 Posted by Elizabeth Taylor at 1:16 PM