Life on the Ranch

Jackson's class went on a field trip to George Ranch yesterday, and I tagged along! The park does a great job showing what life was like on a Texas ranch during the 1800s. A real cowboy kicked off the day with some rules and guidelines before we made our way to an 1830s stock farm. We were guided through each part of the ranch by someone dressed in a period costume. They described what life was like during that time frame in a way the kids could relate to. 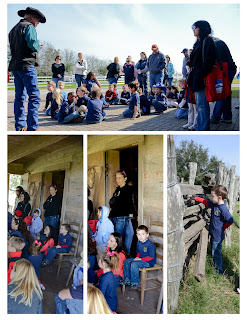 The kids got to explore and touch everything they saw at the stock farm. They got to visit some pigs and chickens, play with some bones, and make some corn meal! 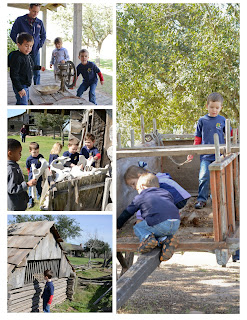 Next they went to an 1890s mansion and learned about a more refined lifestyle. They got to practice using their manners too! After being told a little about the house while standing outside, the kids were instructed to allow the ladies to enter the house first, which Jackson took very seriously. He made sure none of the boys entered until every girl was inside...he's gotten really good at listening and following directions in a learning type of environment. (I'm ready for those skills to transfer to home too!) Once inside they learned how to properly say hello to one another. The girls learned to curtsy, and they boys learned to bow. Then they made their way to the next building. It contained the formal dining room and kitchen, which they learned was separate to prevent the main house from burning down if there was ever a fire in the kitchen. The kids also learned they would not be allowed to sit at that table until they learned hundreds of rules. They were asked to state any they knew, and there were several fun rules that I bet may not have been on the original list! From there they explored the kitchen, which is where they would have eaten until they learned all of those rules! 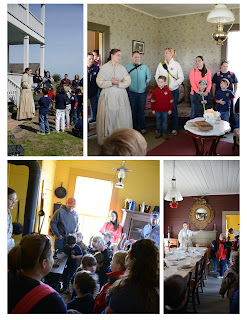 The next stop was the blacksmith's shop. Watching the blacksmith work was one of the highlights of the day. He made an s-hook and a bracelet while we watched, in addition to telling everyone some fun and interesting facts about the job of a blacksmith. He passed around several items for everyone to checkout, but attempting to solve one of his puzzles was a favorite of the adults and kids. 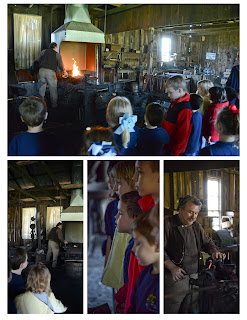 Lunch at the chuckwagon was next on the agenda, and Cookie was an entertaining host, as well as a good cook! We had some delicious beef stew and beans, which Jackson devoured while Cookie shared about life on a cattle drive. We learned the cook was the real disciplinarian of the bunch, as well as the doctor. The kids were ready to run around a bit at this point, so they did! They explored a train car that moved cattle, checked out the sharecropper's land and pigs, and did a little swinging. 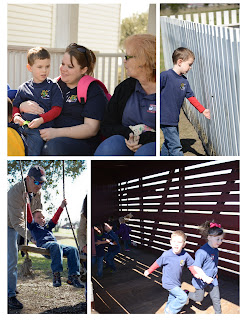 The cowboys gave us a demonstration of what it's like to work with cattle. They roped a calf and showed us how they would pin it down to brand it. Then they showed us a little "cutting" (separating) of the calves, and finally, they introduced us to one of their longhorns. 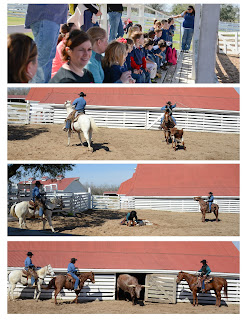 After the show was over, the cowboys let the kids pet the horses, and gave us all a chance to try our hand at roping! Jackson was one of the first ones in line, and he was also the first one to get his lasso around a horn! He was beyond excited! He was even more excited when I didn't get the rope around the cow...meaning he could do something Mommy couldn't! 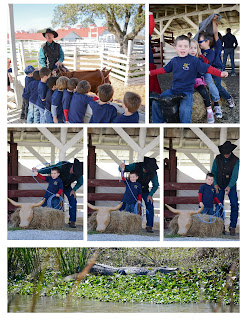 The alligator was something we stumbled across while walking near a creek. I was happy to show it to Jackson and move on!

It was a long, but extremely fun day! I can't wait for Audrey's turn to visit in a couple of years! There are lots more pics in the album!