The day after Christmas Jackson was begging to go fishing, so that afternoon we did! It had been raining all weekend, but the afternoon provided a little break. We headed to Bay Area Park and let him make his first real cast. Of course, I documented it in photos for you. Ross helped him get set up, and then he went for it. It looked like a great cast! Then as you can see in the last picture, everyone was looking up instead of down. He'd landed his line in a tree on the first cast.

Ross was able to get it out. Then we moved down the pier a bit a tried again in an area with no trees. He was SO excited! Then he realized fishing requires patience, which is really tough for a 3 year old! There really wasn't much water around the first pier we tried, so we moved on to another. He had fun casting and reeling in the bait, but he was a little disappointed not to catch a fish, which just means we'll have to try again! 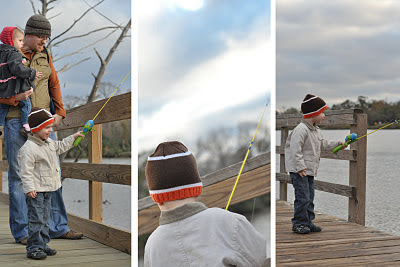 Posted by Elizabeth Taylor at 8:04 AM