We moved into our house almost 2.5 years ago. Within a month or two we bought a new light fixture for our entryway, and it's been sitting in the garage ever since. In addition to that, all of the bulbs in the old fixture burnt out about a year ago, so we've been living in the dark for a while. The problem was that we have 26 foot ceilings in our entry. They don't make ladders that big, and paying someone to do it involved building scaffolding, which was really expensive. Being the clever guy he is, Ross began doing research and finally decided to rent a single man lift. It fit through the front door and would lift him all the way up!

It was a great idea. We rented a trailer, and two men loaded it for us. It weighs a little over 800 lbs and lays down to be hauled. The challenge was getting it off the trailer and into our house. Ross spent almost an hour debating what to do when several guys showed up across the street to work on refinishing a pool. He was over there before they were out of their truck and asked for their help, which they eagerly provided for $20! It was the best $20 we could have spent. 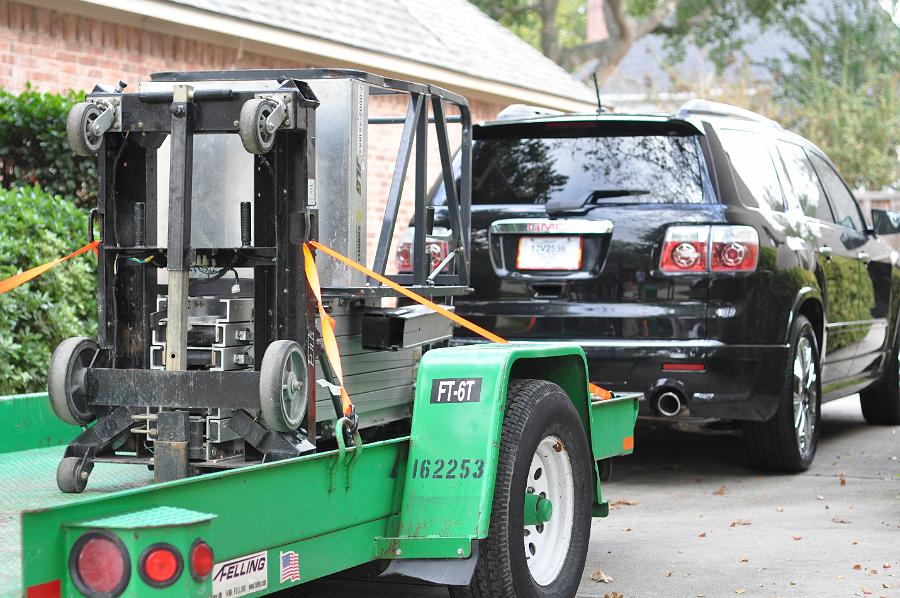 Once the lift was inside, Ross went to work! I think he enjoyed playing with a piece of heavy machinery for a few hours, and when he was done we had a light fixture we love and one we can change the bulbs in easily!

There are a few more pictures of the fun in the album.

P.S. That's my new car that towed the trailer...I'd gotten it 3 days earlier!

Posted by Elizabeth Taylor at 12:22 PM