It's hard to believe Audrey is already 2.5 years old. She is an incredibly sweet and fun-loving little girl! She is bright in so many ways. Not only are her verbal skills strong, but she can reason with the best of them. My favorite thing about Audrey, though, is the way her eyes light up when she gets excited about something, and the way her smile can truly brighten a room. 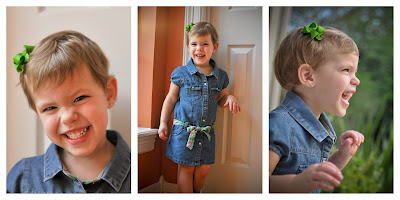 Her brother, Jackson, is a huge part of that. As you can see in the pictures below, she is always watching him. She often takes her cues from him on more things than we'd like, but most of the time that's a good thing. She is great at sharing and taking turns. They both have their moments with melt-downs and not listening like any kids do, but the moments where one of them is upset and the other reaches out to help make up for all the frustration from the former and show just how much they truly love each other. 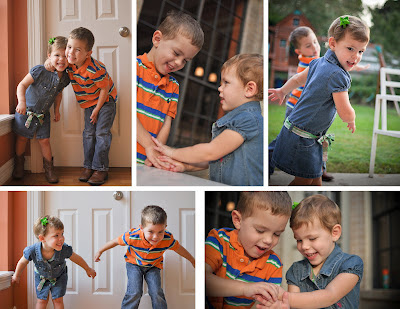 This morning was a great example of all these things. After getting dressed for church, they were ready to have a little fun. Silly poses were up first! Audrey would watch to see what Jackson might do, and then imitate what she saw rather well. Then they headed outside for a little hand-stacking game before they began spinning in circles until they fell down. Finally, on the way to church they each had a toy ring they were happily playing with, and when Audrey dropped hers on the floor and got upset, Jackson gently reached over and gave her his ring. Audrey responded with a smile and a thank you. It was a heart-melting moment, and a reminder that they are both growing up so fast!

Posted by Elizabeth Taylor at 12:30 PM