Audrey has been the student of the week in her class for the last two weeks, which has meant a lot of attention and fun for her! She got to show her friends some pictures of her family, share her favorite books and toys, as well as her favorite snack, and she got to dress up like what she wants to be when she grows up. She had a blast handing out fruit snacks to her friends and dressing up like an astronaut. She chose to take a "Roly Poly Olie" book to share since it's all about her and Jackson (great books for siblings if you've never seen them). The real highlight of the last two weeks has been Oliver the Owl though.

Oliver is the class owl and will be passed around throughout the year for the kids to take pictures with and write down their adventures in his book. Audrey has enjoyed her time with Oliver. He helped Audrey do her "homework" one evening. (Jackson is the one who actually has homework once a week, but Audrey wanted to do some too!) He also joined in a game of Wii before bed one night, and has traveled with us just about everywhere we've gone. 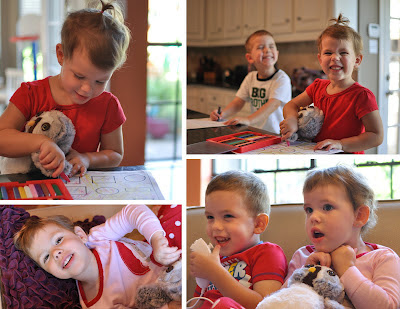 Jackson's soccer practice and games have been one of Audrey's favorite places to take Oliver. He gets a lot of attention from the other kids, and Audrey has been sweet enough to share most of the time. Oliver has also taken several rides in Audrey's stroller, but the most fun has been had when she and Jackson are just being silly together! 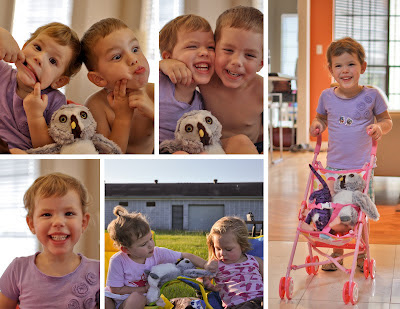 Posted by Elizabeth Taylor at 8:31 PM