This week the Space Shuttle, Endeavour, took it's last ferry flight from NASA's Kennedy Space Center to Los Angeles where it will be put on display at the California Science Center. Along the way she stopped in Houston for a day. Endeavour gave NASA's Johnson Space Center one final show before heading to her new home. It was certainly another emotional moment filled with lots of mixed feelings...joy to see her again, sadness that she won't fly again, joy in remembering all she's done for us, and pain in realizing neither she nor any of the other shuttles that flew in space have a home here in Houston. I am so grateful to have been a part of her history having worked in the Mission Control Center while she helped us assemble the International Space Station.

Here is a picture my friend and fellow ODIN flight controller, Mike Misiora, took of Endeavour's final flyover here at JSC on Wednesday. The flag in this picture is the flag that flies over the Mission Control Center. 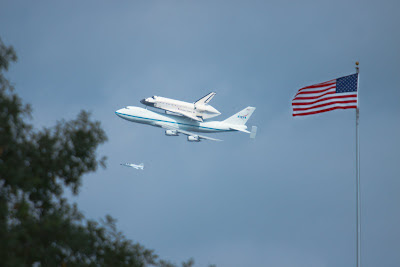 After soccer practice that evening, we attempted to take the kids to see Endeavour up close. Unfortunately, traffic wasn't going to allow us to get there before they closed the gates. Instead we drove to the other side of the fields at Ellington and took one last look at her as the sun was setting on another chapter in NASA's history. 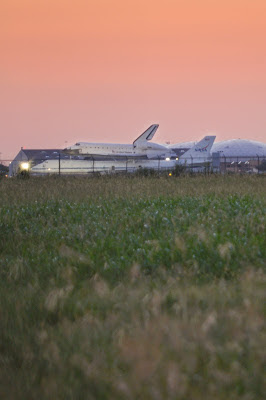 Posted by Elizabeth Taylor at 3:45 PM