Soccer - Third Time is a Charm

Today was Jackson's 3rd soccer game of the season, and I guess the third time really is the charm because Jackson decided to play today! Not only did he get on the field, but he did an incredible job!!! He ran, passed, and scored multiple goals!!!

He's been really funny about the whole experience so far. He loves going to practice and playing with his new friends, but he asks on the way, "Are we going to practice or a game?" If the answer is practice, he says, "Ok. I'll play then. If it's a game, I won't play." He always does really well at practice, but until today has chosen to sit on the sidelines at the games. We've spent a lot of time talking with him about it over the last few weeks, and something finally got him comfortable with the idea of playing today.

Ross and Audrey weren't able to join us today because Ross was helping host another event in our neighborhood. Therefore, I took LOTS of pictures to document this milestone. We arrived just as the game was about to start, and Jackson hesitated for about a second before walking to his coach and teammates on the field. After that, he was good to go...check him out!

Jackson was doing great! He was dribbling the ball down the field and chasing after it when others had the ball. Then he found an opening and zeroed in on the goal. He ran down the field, and scored the first goal of the game with an amazing kick!!! 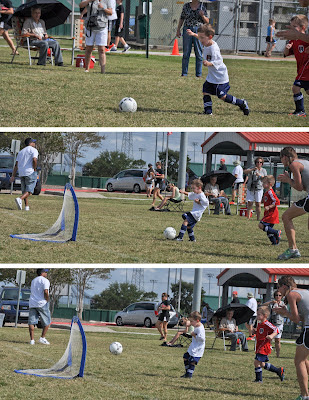 After that success, he was on a roll! He scored several more goals and assisted his teammates in a few others as well. I was so impressed! I also loved that I got a high five and a hug after every goal scored for his team whether he made the goal or not! I also have to add some of the goals he scored weren't exactly easy. He fought for a couple of them, including the one on the top right below. Unfortunately, he ended up scoring for the red team in that case, but I don't think he knows or cares. He was just having fun! 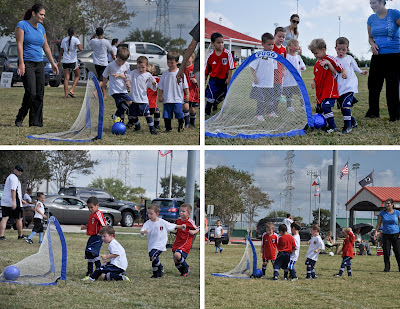 Jackson ended up with the ball a lot during the game. Everyone was so excited he decided to play. They were all so encouraging of him and really helped build his confidence. He played hard and had a great time! 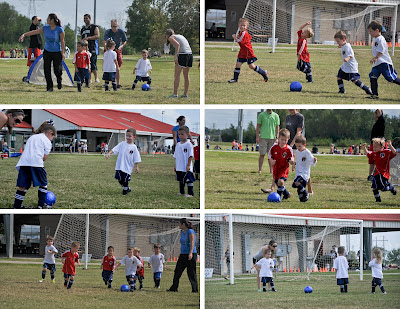 Jackson was exhausted by the end of the game, but he couldn't wait to tell everyone about how much fun he had and how many goals he scored. I didn't keep track, but he's telling everyone he scored 5 goals...it was probably close to that!

Of course, there are even more pictures in the album for those of you who are interested.

Posted by Elizabeth Taylor at 6:55 PM

Way to go Jackson! and way to go Mom!