Jackson has officially started his first after school activity and sport, soccer. It's been an interesting adventure so far. He has done really well at his first two practices. He listens and follows directions. He kicks the ball and plays with his friend, Paige, a lot, and he even scored a goal this week! You can see from the top pictures below he really enjoys it. Unfortunately, the same is not true for actual games yet. He has yet to even step onto the field, and we're not entirely sure why. We're hoping to help him build his confidence over the course of the season and see the frown in the bottom pictures turn upside down! 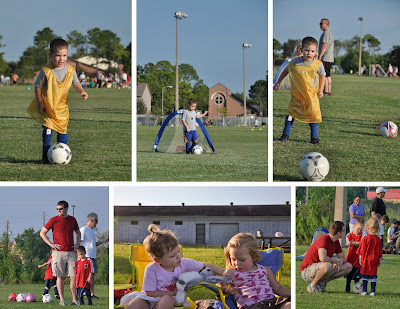 Audrey has made a few new friends too. She loves having a turn to run and kick the ball on the sidelines and after practices, so I'm betting she'll be ready when it's her turn to play!

Posted by Elizabeth Taylor at 8:06 PM