We've really had a busy and fun-filled weekend with one minor exception. Jackson broke his leg on Saturday! We started the day by heading to the day care to help fix up the play ground. Ross and I enjoyed getting together with some of the other parents and staff to take care of some much needed work. Just before lunch, Ross had to leave to work the shuttle mission. I stayed to help finish things up!

After the work day fun was done, we headed to a crawfish boil hosted by our friends, Alene and Chris. The crawfish were wonderful, and Jackson and Audrey had a blast playing around in their backyard. They both especially enjoyed bouncing around on the trampoline! Just before 5 PM, Jackson let out a serious cry. He'd landed wrong on the trampoline...a no-fault accident. Externally, he looked okay, and he's usually quick to brush off a bump or bruise. However, I couldn't get him to stop crying or to stand on his leg. At this point, I still wasn't sure it was serious, but I decided it was time to pack up and head home. Getting out the door with both kiddos by myself was a challenge without Jackson walking, but Alene was a huge help!

After getting home and talking a little more with Jackson, I decided to call my friend, Emma, for a second opinion and a little help. At this point he'd stopped crying unless you touched his leg, and he still refused to stand on it. I was able to put Audrey down for bed, and after talking to Emma and our doctor, I decided to take Jackson to the ER.

We got to the ER around 7 PM and waited. They took his vitals, and we waited some more. Then they took some x-rays, and we waited some more. It was a busy night, and the pediatric section of the ER was packed! At some point in here, our friend, Heather, came to our house to relieve Emma and her daughter, Clara, who were with Audrey. Ross was also able to get to the ER after his shift ended, and we were both grateful to see him! Jackson was quite the trooper, but the later it got, the harder it was to be a tough little man. At one point he said, "I can't stop crying." We tried to explain that it was okay to cry, but he was insistent that he needed to stop.

When we were finally able to get into a room and see a doctor, it wasn't long before the fracture was found on the x-rays, and a splint was being applied to his leg. We knew the splint was helping with the pain because within minutes Jackson was asleep.

We made it home a little after 10 PM, and Jackson went to bed in the clothes he'd been wearing all day. They gave us some strong pain relievers and instructions to visit a pediatric orthopedist on Monday to get a more detailed evaluation and a cast.

In the mean time, Jackson can't walk, which is somewhat frustrating for an almost 3 year old, so we decided to get out of the house this afternoon. We met Emma and Clara at the Houston Zoo for a fun afternoon. It was a little hot, but everyone enjoyed seeing the animals! Jackson propped his leg up in the stroller and just enjoyed the ride. I don't think it really slowed him down all that much, and as you can see in these pictures, he doesn't seem to be in much pain. 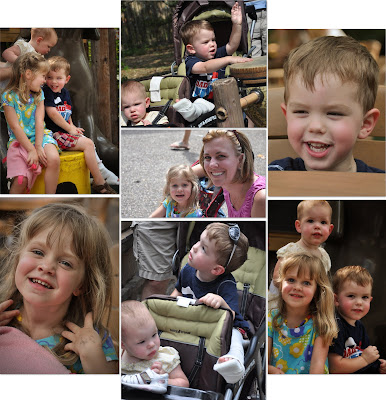 Every time we say Jackson has a broken leg, it doesn't feel like it could possibly be true. Neither of us have ever had a broken bone, so we can't even begin to understand what it must be like. We're hopeful it will heal quickly and not be in a place that could cause problems as he grows! We're going to try to get an appointment with the pediatric orthopedist tomorrow, so we should know more soon!

Posted by Elizabeth Taylor at 7:24 PM

friend... this is just craziness! i'm so sorry he's having to go through all that :( i'm sure houston has some fantastic pediatric orthopedic docs and they'll get him straight soon! if not, i KNOW dallas does and we'll be back there mid-june for muchkin!