Every year, Jackson and Audrey's school do a Circus performance during the summer. This year was no exception!

Jackson's class did a separate performance in the morning, and he had a solo part. He was a lion, which some of you may guess is one of his favorite animals because he loves to ROAR!

In the afternoon, the entire school performed. Audrey was an adorable dancing bear. She actually danced a little after the initial shock of being in front of so many strangers. Once she spotted me in the crowd though, she was pretty cute. She wasn't sure if she was allowed to come to me, so she slowly started stepping forward. When she reached the edge of the crowd, she put her head down and continued her little steps forward until she reached me. At that point, she lifted her head, grinned, and climbed into my lap to watch the rest of the show.

We always suspected Jackson might be the class clown, and he was that day! He did a great job "juggling" (throwing balls in the air) and making people laugh and smile. 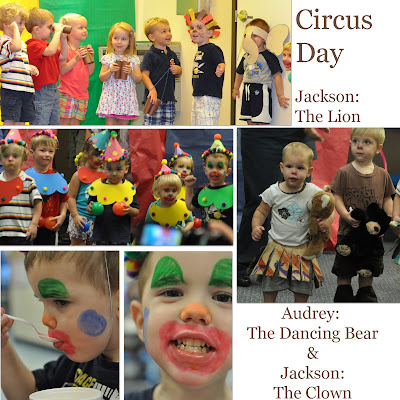 Everyone did great and enjoyed the show! There are more pictures in the album.

Posted by Elizabeth Taylor at 7:24 PM