We were fortunate enough to be able to watch the final Shuttle launch in person from the Kennedy Space Center (KSC) Causeway. Ross won the lottery to get a Causeway Pass, which allows you to take up to 7 people in a vehicle to see the launch, so we invited our friends, the Fulliloves (Chris, Emma, and Clara), to join us. We left Audrey at home with my Dad, AKA Pop, since it was going to be a long and very busy weekend. Audrey did get to see a shuttle launch last year, which she's not likely to remember, but we have pictures to prove it! We missed her terribly and feel guilty for leaving her behind, but I don't know that we could have squeezed as much into this trip if she'd come. I'll limit this post to the details of the launch, but we went to Disney's Magic Kingdom and Animal Kingdom while we were there too!

We all flew to Florida on Thursday. Chris arrived earlier in the day, so he killed time by picking up our rental car and running to the grocery store. We stayed in a rental house in New Smyrna Beach, which worked out great! We awoke early Friday morning, loaded the car, picked up breakfast, and made our way to KSC. Traffic got heavy about 10 miles away, and we were there 4 hours early! Once we made it to the causeway, we set up camp, had some snacks, let the kids play, and eagerly waited! 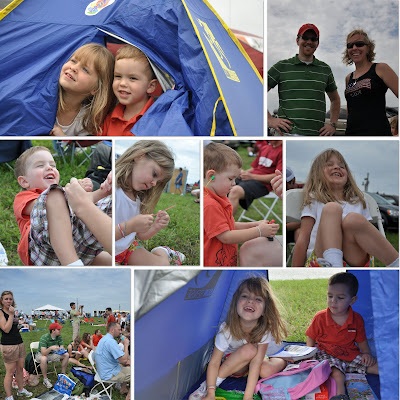 Chris and Emma rented this awesome lens, which we used like a telescope prior to launch. 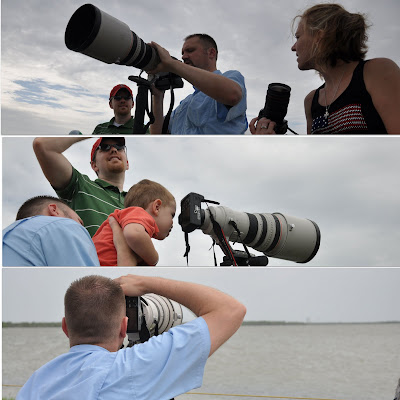 We each checked our phones every few minutes for the latest updates on the launch. Weather was forecasted to be "no go," so we were mentally preparing ourselves to make the trek out and back again the next day. Then about 10 minutes prior to the scheduled launch time of 11:26 ET, an announcement was made over the loops to the Shuttle Commander, Chris Ferguson, that things were looking good and we were likely going to launch today! (The loops were being played over loud speakers on the causeway.) I literally started bouncing up and down with excitement! Here are the pics from just after the announcement. 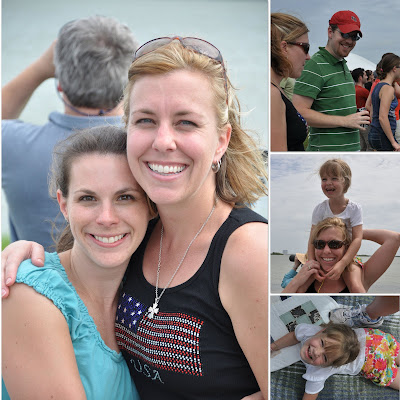 The countdown resumed at T-9 minutes, and we all took our places to watch the final Shuttle launch! At T-31 seconds to launch, a call was made that paused the sequence while retraction of the Gaseous Oxygen Vent Arm, or "Beanie Cap," was verified. As a former flight controller, I was filled with pride by the way the team managed everything. It's a lot of pressure to make that type of call during such a dynamic event and then resolve it quickly allowing the launch to resume, which it did! The crowd counted down from 10 seconds, and we watched the Space Shuttle, Atlantis, liftoff.

From where we were standing you could see the main engines ignite, the plume surround the vehicle, and Atlantis powerfully lift off the ground. It was a cloudy day, so she disappeared a little too quickly for us, but about the time Atlantis went through the clouds the rumble from the launch began to reach us. It's a sound and a feeling I won't forget.

Here's one of the amazing pictures Chris took during the launch followed by my snapshots of our view. 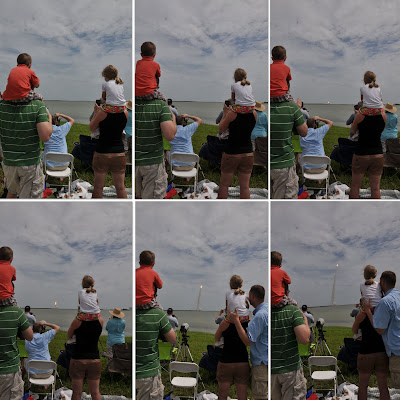 While we waited for the MECO (Main Engine Cut Off) call, which assures the crew has safely made it to orbit, we took some pics with the plume in the background. 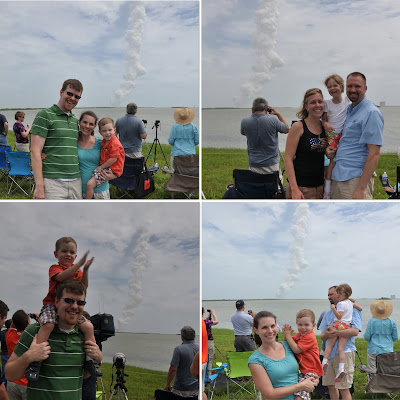 Once Atlantis reached MECO, we packed up our stuff and headed to the car. A very nice gentleman even gave us a ride in his golf cart so we wouldn't have to walk as far! Because there were estimated to be over 1 million people at this launch, it took a while to get back to our rental house. The kids passed the time with naps and movies, while the adults talked non-stop about how amazing the launch was!

There are more pictures of our launch experience in the album, and there's more to come from the weekend!

Posted by Elizabeth Taylor at 8:34 AM